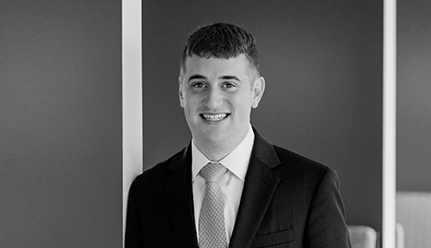 Geoffrey Block joined Kellogg Hansen as an associate in 2022. Prior to joining the firm, Mr. Block clerked for Judge Raymond Kethledge of the U.S. Court of Appeals for the Sixth Circuit.

Mr. Block graduated from Yale Law School, where he participated in the Supreme Court Advocacy Clinic and received the Edward D. Robbins Memorial Prize and the John Fletcher Caskey Prize. He also participated in the Advanced Appellate Litigation Project and argued before the Third Circuit. Prior to attending law school, Mr. Block was a Surface Warfare Officer in the U.S. Navy. He earned his undergraduate degree in Industrial & Labor Relations from Cornell University.

*Admitted in Maryland. Not Admitted in the District of Columbia. Practice supervised by members of the firm.

Why the Postal Service Is Critical to National Security, Lawfare, (2020)

How to Recover a Role for Congress and the Courts in Decisions to Wage War, Just Security, (2020) (with Oona Hathaway)