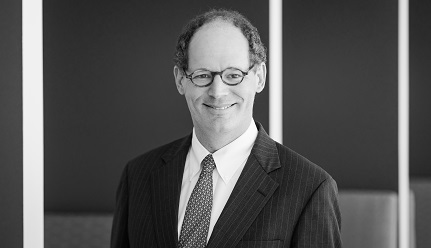 Mr. Klineberg practices primarily in the areas of administrative law and appellate litigation, representing clients in matters before the Federal Communications Commission, as well as before the United States Supreme Court and various federal district and appellate courts.  Mr. Klineberg also advises clients on the applicability of the Rules of Professional Conduct, having served for seven years on the D.C. Bar Legal Ethics Committee, completing his last three years as Chair.  In August 2013, Mr. Klineberg returned to the firm after a one-year leave of absence as the Counselor on International Law in the Office of the Legal Adviser at the U.S. Department of State.  Mr. Klineberg graduated magna cum laude from Princeton University in 1985, where he majored in International Relations in the Princeton School for Public and International Affairs.  He spent the next two years at Balliol College, Oxford University, where he was awarded a Masters of Philosophy degree in International Relations with distinction.  He graduated from Yale Law School in 1990 and was an Articles Editor on the Yale Law Journal.  From 1990 to 1991, he clerked for the Honorable José A. Cabranes of the United States District Court for the District of Connecticut; from 1991 to 1992, he clerked for the Honorable Patricia M. Wald of the United States Court of Appeals for the District of Columbia Circuit; and, during October Term 1992, he clerked for the Honorable Harry A. Blackmun of the United States Supreme Court.  After clerking, Mr. Klineberg worked for two years as a Special Assistant to the Deputy Attorney General at the U.S. Department of Justice.

Chair, U.S. District Court for the District of Columbia Committee on Grievances, 2022-present

Member, Board of Directors, The Historical Society of the District of Columbia Circuit, 2011-2017

Member, Board of Directors, The American Constitution Society for Law and Policy, 2001-2004

Mr. Klineberg successfully defended AT&T in a formal complaint proceeding before the Federal Communications Commission (FCC) and before the Eleventh Circuit, which dismissed the petition for review and upheld the FCC’s determination that the Complainant’s claims had been released.

Mr. Klineberg served as counsel of record for Respondent AT&T Inc. in this U.S. Supreme Court case presenting the question whether Exemption 7(C) of the Freedom of Information Act (FOIA), which protects from disclosure any law enforcement record the disclosure of which “could reasonably be expected to constitute an unwarranted invasion of personal privacy,” protects the privacy interests of a corporation.

Mr. Klineberg was lead counsel for Defendant-Appellant Southern New England Telephone Co. (SNET) in this Second Circuit case presenting the question whether the District Court should have dismissed the case as moot when the Connecticut Legislature enacted a state law that required SNET to obtain a franchise before it could provide video services in the State.

Mr. Klineberg was lead counsel for Plaintiff-Appellee BellSouth Telecommunications, Inc. in this Sixth Circuit case presenting the question whether the Kentucky Legislature, after imposing a new tax on the gross revenues of telecommunications providers, could prohibit these providers from “collect[ing] the tax directly” from consumers and from “separately stat[ing] the tax on the bill.”

Mr. Klineberg was lead counsel for Plaintiff AT&T Connecticut (AT&T) in this emergency petition in Connecticut Superior Court, presenting the question whether a state law, which established a new, comprehensive regulatory framework governing video franchising in Connecticut, applied to new entrants like AT&T, notwithstanding a federal District Court’s ruling that AT&T’s video service constituted a “cable service” under federal law.

Mr. Klineberg served as lead counsel for Intervenor SBC Communications Inc. (SBC) in this D.C. Circuit case, presenting the question whether the FCC’s granting of SBC’s application for authority to provide long-distance telephone services in the States of Kansas and Oklahoma was lawful.

Shifting Tides in the Business of Law, Washington Lawyer, at 6 (May/June 2021)

Adapting to Our New Reality, Washington Lawyer, at 6 (July/Aug 2020)

Co-Author (with Janet Reno), What Would Jackson Do?  Some Old Advice for the New Attorney General, 2 Harvard Law and Policy Review 197 (2008)

Counselor on International Law, Office of the Legal Adviser, U.S. Department of State, 2012-2013