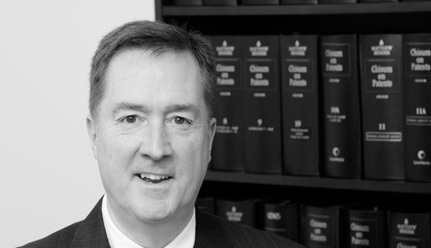 John Thorne is a partner with Kellogg, Hansen, Todd, Figel & Frederick in Washington DC, where he represents plaintiffs and defendants in commercial litigation in federal and state courts and before law enforcement agencies.

In patent cases, with a team of his partners and associates, Mr. Thorne won a Final Initial Determination of violation and a recommended general exclusion order against all respondents and other importing infringers following the ITC’s first virtual evidentiary hearing.  In the Matter of Certain High-Density Fiber Optic Equipment and Components Thereof, USITC Inv. No. 337-TA-1194 (Judge David P. Shaw, March 23, 2021) (finding a violation with respect to all asserted patents and all accused products).  He was lead trial counsel for the defendant in Audio MPEG v. Dell Inc. (E.D. Va. 2017). He won one of the first injunctions following eBay; he has represented tech companies in seeking to improve patent quality; he represented patent owners and defendants in numerous cases in district court and at the USITC. In other IP cases, he won a decision overturning ICANN’s refusal to award Amazon the domain name “.amazon.” Amazon EU S.à.r.l. v. ICANN, Final Declaration (July 11, 2017). He won a first-ever rate reduction at the Copyright Royalty Board. His copyright client, “iHeartRadio, the second-largest webcaster in the country, got a big win.” Billboard, Inside the CRB’s New Streaming Rates (Dec. 17, 2015) (original emphasis).

He is representing media companies in obtaining merger approvals. He obtained clearance for the mergers of Bell Atlantic, NYNEX, AirTouch, GTE, MCI, Alltel, and Terremark that created Verizon and Verizon Wireless.

He represents the State of Oklahoma in Johnson & Johnson’s appeal to the Oklahoma Supreme Court from the first trial – and $572 million win – against a prescription opioids oversupplier.

In 1983 he represented pro bono Harold Washington, the first African-American mayor of Chicago. He was the founding board chair of the Bishop John T. Walker School for Boys, a tuition-free private school for boys living southeast of the Anacostia River, which was started in part with funds paid by the losing plaintiff in Trinko and the losing defendant in Verizon v. Vonage Holdings Corp., 503 F.3d 1295 (Fed. Cir. 2007).

With his partners, Mr. Thorne co-authored the principal telecom law treatises and published antitrust articles in the University of Chicago Law Review, the George Mason Law Review, and the Federalist Society’s Engage. He taught telecom law for ten years at Columbia Law School and for two years at Georgetown University Law Center.